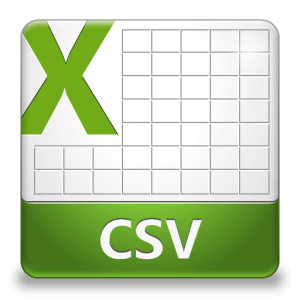 Most applications will allow you to import and export data in CSV format.

It is therefore important to get a good understanding of the CSV format to better handle the data you work with on a daily basis.

This article runs through some of the nuances of working with CSV files and provides plenty of examples to tie everything together. Feel free to share your own tips in the comments section at the end.

CSV (Comma Separated Values) format is the most common import and export format for spreadsheets and databases.

A CSV file contains a number of rows, each containing a number of columns, usually separated by commas.

Note: With no set standard each application that uses CSV can format it in slightly different ways. While RFC 4180 below provides some guidelines often you'll find yourself viewing a CSV file in a text editor to determine what formatting has been used.

The file format .csv is not meant to be one in which people store data long-term; rather, it is meant to be a way to move data from one program to another.

Consider it an international cargo container, if that helps.

What does CRLF stand for?

CR on its own stands for Carriage Return and is a control character used to reset a device's position to the beginning of a line of text. LF is Line Feed, a move to the next line.

In plain English CRLF moves the position to the start of a new line. In the case of CSV this is used to define a new row.

Is there a CSV file format standard?

A general standard for the CSV file format does not exist, but RFC 4180 provides a de facto standard for some aspects.

Below are the RFC 4180 definitions of CSV formats:

(Hint: You don't type in 'CRLF', it merely shows where you move to a new line)


The above table of data may be represented in CSV format as follows:

Note: In some European countries where a comma is used to represent a decimal place for currencies a semicolon may be used to delimit (seperate) the data. Examples below:

The latter format is not RFC 4180 compliant. Compliance could be achieved by the use of a comma instead of a semicolon as a separator and either the international notation for the representation of the decimal mark or the practice of quoting all numbers that have a decimal mark.

Are there data limits on CSV files when working with Excel?

XML (Extensible Markup Language) is a markup language that defines a set of rules for encoding documents in a format that is both human and machine readable.

It's mostly used to transmit data across the internet between applications and is used in many API's.

In advantage over CSV, XML has a cleary defined format.

CSV does have one advantage over XML for specification in new designs. CSV has much lower overhead, thereby using much less bandwidth and storage than XML.

For new designs where overhead issues have high importance or criticality, CSV, or a more robust low-bandwidth alternative, may be the better choice.

Looking to convert CSV to XML?

While it might be more common for new applications to use XML or JSON to transmit data the majority of legacy systems will still be using CSV for a very long time.

The lack of a standard can make working with CSV files tricky although that may be about to change in 2014.

The best you can do sometimes is insist on a consistent format for the CSV files received and point any strange setups to RFC 4180.

It is often quicker to have someone fix the format of the file sent to you than building a number of work arounds for poorly formatted files.

Here are some articles that may be of interest: