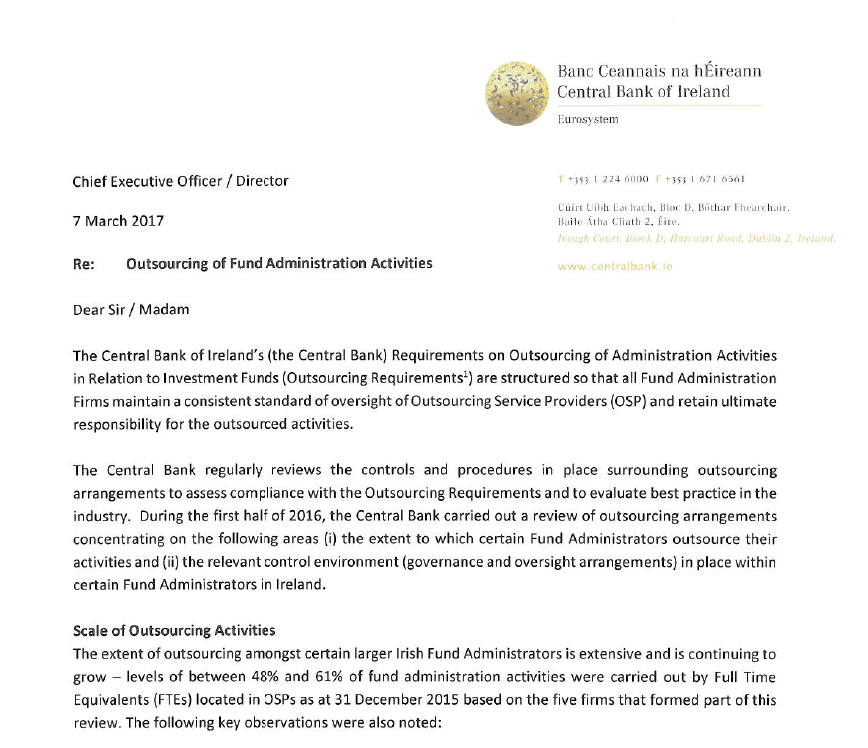 The Central Bank of Ireland this week issued a "Dear CEO" letter outlining concerns over the rising level of outsourcing to global service providers. You can read the letter here.

Based on a thematic review carried out on five of the larger Irish Fund Administrators during the first half of 2016 the Central Bank found that the extent of outsourcing amongst these is extensive and continuing to grow with levels of between 48% and 68% of fund administration activities outsourced as at the end of 2015.

That will likely have led to a panicked review of 2017/18 outsourcing plans in several Dublin offices this week.

The Central Bank also made the following observations:

From our own observations and what can be deduced from the Central Banks letter, major parts of the valuation of a fund, which is listed as being administered in Ireland is being carried out by another group entity in lower cost countries such as Poland or India. Review and oversight is then carried out in Ireland, allowing it to fall under the regulation of the Central Bank.

How has this trend towards Outsourcing come about?

Over the last 5 years the pace of outsourcing has accelerated. Against a backdrop of increasing costs and lower fees, Fund Administrators are increasingly under pressure to find cost arbitrages for their businesses. As with all businesses there is a constant race to drive revenues and reduce cost, thus growing profits.

Fund Administrators globally have been facing strong headwinds when it comes to increasing revenue. As the Hedge Fund Industry struggles with performance and becomes more populated with Institutional Investors, pressure has been mounting on Fund Managers to reduce fees. The old two and twenty model is officially dead. Managers cost focus has led to knock on fee pressures being put on their service providers, namely Fund Administrators.

With regulation increasing workloads, Fund Admins are caught in a perfect storm of decreasing fees and growing demands from clients. Managers are reluctant to increase fees for handling these additional services. Some Fund Admins are struggling to improve their gross margins above that of a consultancy business model. i.e. more business equals more people and flat to declining profit margins.

In this equation, the only lever you can pull is to reduce the cost of people.

How will this play out long term?

If we play out this trend of outsourcing Fund Administration activities to its long-term conclusion, you’d have to wonder what happens when there are no lower cost centres to move to. Even in perceived lower cost locations we are seeing high inflation and cost savings that could be achieved five years ago, are no longer possible.

The letter issued by the Central Bank also casts doubts over whether regulators will continue to approve the outsourcing of these activities to the level they have thus far.

From a client service perspective Managers are becoming increasingly dissatisfied with the level of outsourcing that is occurring. We’ve heard of cases whereby a Manager used to be able to phone their contact in Ireland to talk through an issue and have it resolved while on the phone. This now requires a ticket being issued that must cycle through several time zones and teams before being fixed. In cases where the Fund Manager is not being passed on the cost saving from this outsourcing, the result is an inferior service for the same price.

There is no doubt Fund Administrators face major challenges in the next 5-10 years:

Software is eating the world

Some personal observations following on from the Central Banks letter and more generally on Fund Administration trends:

The fallacy of Outsourcing

When you look at the ‘why’ of outsourcing it gives you a few clues as to why this may not be the strategy of tomorrows winning Fund Administrators.

Outsourcing is chosen to reduce costs by moving activities from one location to a lower cost one.

Sounds logical, what could be wrong with that?

A couple of things:

As the CEO of a tech company I’m the first to admit that it could appear self-serving to suggest that technology is the solution to the Fund Administrations Industries woes. The Industry already uses technology across its businesses.

For me, what needs to change is how Industry leaders think about technology when it comes to their business in 10 years.

Imagine a world where fund data flows automatically and seamlessly into a single platform that in turn automates the processing, valuation and reporting of a Fund’s NAV. Highly experienced and knowledgeable staff are then freed up to manage the relationship side of the business, delighting Investors and providing Managers with key insights into their business.

Few seem to have accepted this reality and should take heed from some famous last words below.

“We didn’t do anything wrong but somehow we lost” Stephen Elop, Former Nokia CEO. 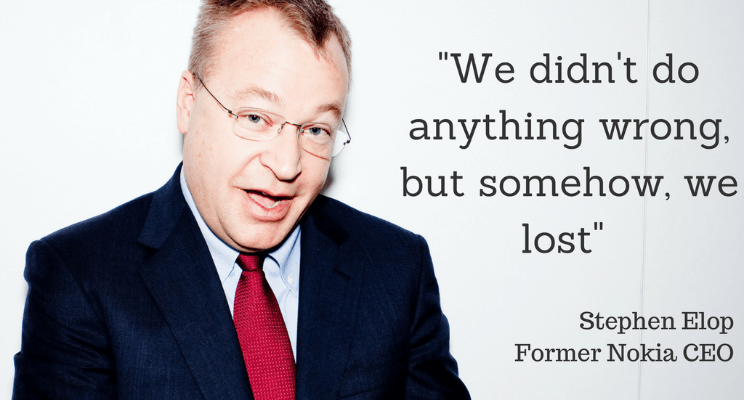