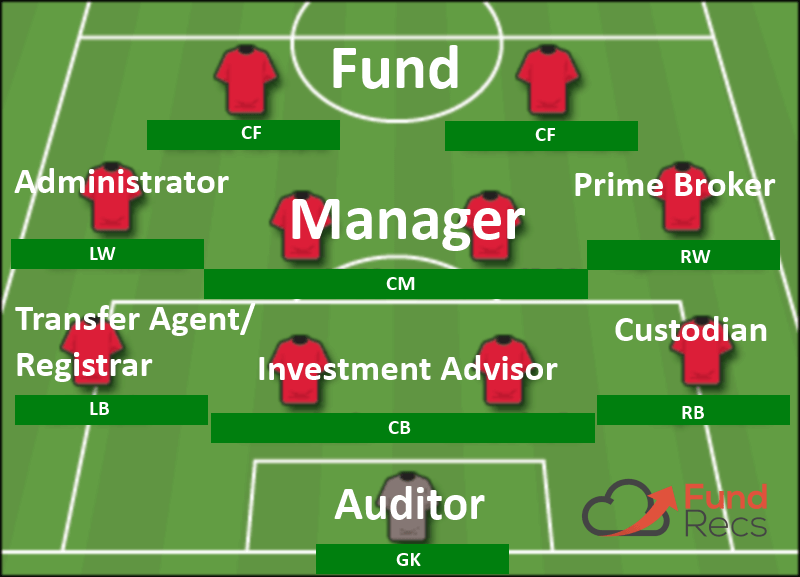 With the World Cup coming to a climax in Brazil this Sunday we thought we'd have a little fun picking a team from the universe of Hedge Fund related parties.

Who knew Hedge Funds could be so much fun!

Every World Cup winning team needs a safe pair of hands to mind the goals. Our Auditors pick up the mistakes of others and generally organize the rest of the outfield players. Have been known to drop a ball or two over the years!

When you think of the great left backs, one word can be used to describe them all - solid. The Transfer Agent works away in the background consistently doing the basics right but rarely gets the glory.

Many a great Fund has a great Investment Advisor at the heart of the team. Look to them to start moves and go on the offensive for set plays.

At right back we have the Custodians. Safely looking after assets and generally being Mr. Reliable. When these folks make a mistake you're likely to pay dearly.

Covering a lot of ground on the left wing are the Administrators. The work horses of the Fund Industry their role is changing as they're expected to cover the middle as well as track back.

Every great team needs a midfield general calling the shots. They're the glue that holds everything together and our vital cog is the Fund Manager.

On the right wing is the Prime Broker. Another player that gets through plenty of work and links the play between others.

Up front is the star performer, the Fund itself! The Fund is the one with the big name and gets all the attention. Although eventually, they will be replaced by younger players as they move off into retirement and the cycle starts again.

On the bench we keep the advisors in reserve. The Legal, Tax, Accounting and Consultancy experts are ready to be sprung when needed.

The winning World Cup Hedge Fund team is likely to have a player/manager with the Fund Manager playing both roles.

No, not FIFA or even UEFA. Think more ESMA, the FCA and the SEC.

A team is nothing without its fans and similarly without Investors a Hedge Fund has little purpose. Just like football fans a Hedge Fund must treat it's investors with respect or face the possibility of them leaving for another team. Keep losing and even the most loyal fans will desert you.